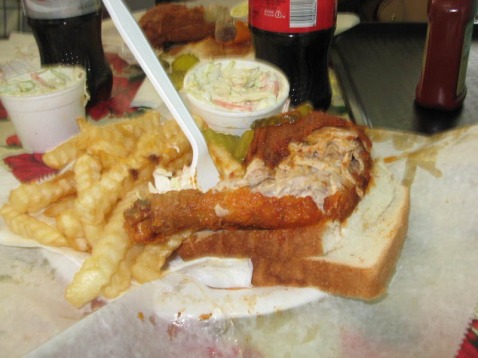 Fact: The best part of fried chicken is the skin.
Fact: The best part of life is a sandwich.
Fact:  Some of the best fried chicken in the world is Nashville-style hot chicken from Prince's, where they smother just-from-the-skillet chicken in a paste of 2/3 lard to 1/3 cayenne.
Fact: One of the best sandwiches in the world is the chicken skin sandwich.  Still-hot Prince's chicken skin on white bread with a coleslaw made from cabbage, carrots, mayo, and ranch dressing.
Fact: God was watching while I constructed and consumed this sandwich, and he gave me a wink and eight high fives. 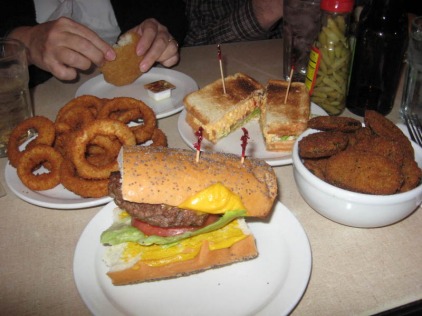 Picture if you will, Bill Phipps, a death row inmate at Brushy Mountain inmate circa 1946. His head is shaved, his hands are shaky, he can smell the bucket of brine that will convey the volts into his brain. A guard comes to his door and pauses. Bishop is his name and he notes that it'll be a quieter place without old Billy around. No more checkers games on hot afternoons, no more jaunty ukulele songs about islands neither of them would ever see. Bishop holds on to the bars of the cell and looks down; in a way he has said his goodbye. The squeaky wheel and tinny rattle of the lunch cart never echoed so loud. The meal is passed to Phipps.  Holy mother, it's that sumbitch's last meal and he knew just what to ask for. The kindly guards have moved heaven and earth to get him a Rotier's lunch. Sumptuous and sweet, rich and creamy pimiento cheese on toasted white bread, golden onion rings doused in hot vinegar, fried zucchini, custardy in the middle, and, standing tall like a big, old honky-tonk piano, the pride of the West End, the French bread cheeseburger with all the trimmings. Now they can juice that boy up right. See-ya in the funnies, Billy Phipps.